Cities must address climate change. More than half of the world’s population is urban, and cities emit 75% of all carbon dioxide from energy use1. Meeting the target of the 2015 Paris climate agreement to keep warming well below 2° C above pre-industrial levels requires staying within a ‘carbon budget’ and emitting no more than around 800 gigatonnes of CO2 in total after 2017. Yet bringing the rest of the world up to the same infrastructure level as developed countries (those listed as Annex 1 to the Kyoto Protocol) by 2050 could take up to 350 gigatonnes of the remaining global carbon budget2. Much of this growth will be in cities in the developing world (see ‘Urban development challenge’).

Cities are increasingly feeling the effects of extreme weather. Many are located on floodplains, in dry areas or on coasts. In 2017, more than 1,000 people died and 45 million people lost homes, livelihoods and services when severe floods hit southeast Asian cities, including Dhaka in Bangladesh and Mumbai in India. California’s suburbs and Rio de Janeiro in Brazil have experienced floods and mudslides on the heels of drought, wildfires and heavy rains. Cape Town in South Africa has endured extreme drought since 2015. By 2030, millions of people and US$4 trillion of assets will be at risk from such events (see go.nature.com/2sbj4qh). 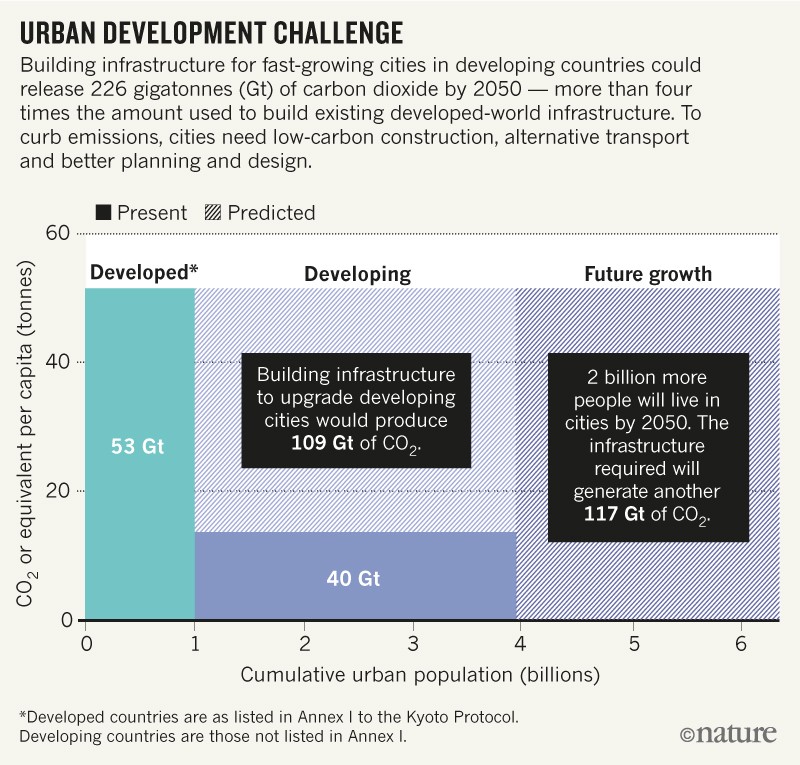 Per capita data from ref. 2

In response, the science of cities is evolving. Urban planners and decision-makers need evidence to help them manage risks and develop strategies for climate mitigation and adaptation. Scientists are increasingly thinking of cities as complex systems and working more closely with communities. New concepts are emerging, such as smart cities.

Yet the scope and applicability of urban research is stymied: a lack of long-term studies of urban climates and their impacts makes it hard for city officials to plan decades ahead. And research grants focused on single disciplines or local or national needs provide little scope for cross-disciplinary projects or comparative analyses between regions. Few online platforms exist to help cities share information and learn from one another.

Science needs to have a stronger role in urban policy and practice. Next week in Edmonton, Canada, the Intergovernmental Panel on Climate Change (IPCC) and 9 global partners will bring together some 700 researchers, policymakers and practitioners from 80 countries for the IPCC Cities and Climate Change Science Conference (https://citiesipcc.org). Participants will establish a global research agenda that will inform the IPCC special report on cities — part of the panel’s seventh assessment cycle, which begins in 2023.

As members of the scientific steering committee for the IPCC conference, here we identify six priorities for cities and climate-change research.

Mitigating and adapting to urban climate change will require work in several areas.

Expand observations. Researchers and city authorities need to extend the quantity and types of urban data collected. The biggest gaps are in the global south. Data on informal settlements are sparse or non-existent. As well as improving availability, the coverage, quality, resolution and reliability of data need to be enhanced, and reporting should be standardized. Methodologies for remote sensing with satellites, drones and autonomous vehicles need to be developed for monitoring dense urban fabrics.

Reliable inventories of greenhouse gases are needed — from individual dwellings, factories and roads — as well as methods for verifying them. Most policymakers and practitioners still rely on city-wide or national emissions data. It is crucial to track the origins and types of air pollution with climate effects — including methane, ozone, black carbon and aerosols — because reducing these is of benefit to public health as well as to climate mitigation.

To understand the wider impacts of flooding, it is crucial to map buried networks of pipes and cables as well as hidden spaces in buildings and below ground. Researchers also need to know how people interact with infrastructure and public spaces when an extreme weather event is forecast, for example.

Narratives and local knowledge must be assimilated with technical data. Old neighbourhoods in Kano, Nigeria, have proved more resilient to floods and heat than have developments built after 1980 (ref. 3). Flat mud roofs are better at absorbing and evaporating rainwater than are metal or concrete. And Nigerian cities have historically included many open spaces, green areas and wetlands.

A global network of ‘urban observatories’ — diverse cities that are focal points for research and long-term monitoring — is needed. Data, research and practice should be shared online. In the United Kingdom, Newcastle University collects 1 million measurements a day from sensors across the city and makes them openly available online in real time. These range from transport emissions, precipitation, water flows and air qualities to biodiversity measures such as beehive weight. The city council and the transport, energy, environmental and water sectors are using the data. Similar observatories are being developed in Sheffield and Bristol.

To ensure trust, such data need to be verifiable and used transparently. Researchers and practitioners need to develop mechanisms for governance, security, ethics and engagement. There are privacy and security concerns; for example, many cities are now legally required to protect private data. Some are reticent to publish information that might reveal they failed to meet targets.

Comparative studies are needed of cities in different contexts to disentangle these interactions and to find solutions. We need to know how urban morphologies, building materials and human activities affect atmospheric circulation, heat and light radiation, urban energy and water budgets. How much permeable paving is needed to lower flood risk, as Melbourne is doing with bluestone pavements? What is the impact of reflective roads and roofs, as tried in New York and Los Angeles?

Climate simulations need to account for urbanization, and be scaled down to city and neighbourhood levels. Methodologies for high-resolution risk assessment of heatwaves, coastal erosion and inundation are needed. Different approaches and models need to be compared, benchmarked and coupled with assessments of local social vulnerabilities and capabilities.

Study informal settlements. By 2050, three billion people, mostly in the global south, will be living in slums: neighbourhoods that have no mainstream governance, on land that is not zoned for development and in places that are exposed to climate-related hazards such as floods. Poor housing and basic services compound the risks for individuals and households.

Enabling these communities to adapt is a priority. Assessments are needed of grass-roots efforts to address hazards. For example, community-based organizations are buying land outside flood zones and constructing resilient housing in the Philippines6, and mapping flood risk in Gorakhpur, India. Such studies should look at formal and informal relationships and include voices from marginalized groups.

Models and analytical tools tailored to these communities need to be developed, because the approaches used in cities in the global north cannot be transplanted. Data scarcity, informal socio-economic processes and limited local capacities must be considered.

Policies need to be assessed. For example, the cities of Adama and Mekele in Ethiopia boosted affordable housing around their peripheries by increasing the area of land available for development. Keeping land tenure in government hands saves effort in the long run; large networks of infrastructure and public spaces can be planned and built coherently, without having to retrofit poorly designed areas. Informal settlements may have lessons for sustainability. Residents are often efficient at using scarce resources and reusing and recycling waste. Mitigation efforts need to support, rather than undermine, livelihoods and human well-being as well as the informal economy.

Harness disruptive technologies. The digital revolution is transforming cities. For example, urban shared-mobility schemes have improved air quality and social inclusion, and reduced congestion. In Lisbon, for instance, studies have shown that a fleet of shared taxis could maintain residents’ mobility levels using only 3% of the current number of vehicles. Global adoption of shared, automated electric vehicles could cut world’s vehicle stocks by one-third.

Yet these benefits could be reduced if the ease of using such technologies ultimately led to increased vehicle use. Researchers need to understand what drives positive and negative outcomes, as well as how to influence them — such as by enabling more shared travel through information and communication technologies.

Digitally connecting and controlling water, power, communications and transport systems increases the likelihood that climate hazards will affect such networks simultaneously. These coupled risks — and where responsibilities lie — are poorly understood7. Outages cascade and lead to shortages of food, cash and fuel, as happened in New York after Hurricane Sandy in 2012.

Affordable materials and technologies that can reduce the carbon intensity of future infrastructure in the global south should be developed and commercialized. For example, cement can be engineered to absorb more CO2. Cement production is the third-largest human-made source of emissions after fossil-fuel burning and land-use change, contributing around 5.6% of global fossil-fuel and industry-related CO2emissions. ‘Carbon-neutral’ timber and bamboo have been used to build lightweight skyscrapers. These materials need to be sustainably produced at low cost. The C40’s Climate Positive Development Programis experimenting in 18 cities to achieve net-negative emissions in mixed-development projects of up to 300,000 people.

Vegetation corridors, green parks, reed beds and low-lying areas that soak up water can be woven into the built environment to reduce flood and heat risks, while improving biodiversity and carbon storage. More needs to be known about the long-term performance and management of such features. Design and engineering standards need to be developed.

A start is to find and scale up successful local innovations. For example, Shanghai is experimenting with a range of low-carbon practices, including district heating networks, carbon labelling of consumer products and financial mechanisms9. Research and policy frameworks need to be developed to translate successful local innovations across cities.

Recognize global sustainability context. Cities are open, complex, dynamic systems with a global reach. Well-intended local actions can displace issues to other sectors or into the future. For example, one city’s crackdown on energy-intensive production might shift the problem to less-regulated regions, with no net gain on emissions reduction. Many cities in China, South Korea and Vietnam have relocated industries outside the city to improve their environmental ratings.

A systems approach is needed to deliver on global climate change as well as the UN’s New Urban Agenda and Sustainable Development Goals. More needs to be known about interactions, trade-offs and synergies between urban processes and their impacts elsewhere10. This entails working across disciplines and governance silos. ‘Nexus approaches’ that trace linkages between water, food and energy systems should be extended to other sectors, to understand the relationships between infrastructure provision, inequality and resilience, for example.

Researchers, policymakers, practitioners and other city stakeholders need to strengthen partnerships and produce knowledge together. Universities should support data platforms and long-term research programmes in their cities, while sharing knowledge nationally and internationally. Scientists should become more engaged with policy and practice networks such as C40 Cities, ICLEI Local Governments for Sustainability and United Cities and Local Governments.

We would like to see cities establish scientific advisory boards chaired by a chief science adviser, as many government departments do. These would enhance the profile of science, build capacity and leadership, and provide a point of contact.

Funding agencies need to provide grants for cross-disciplinary research and comparative studies, especially in the global south. Cities might mandate that companies bidding for large-scale government projects in renewable energy or sustainable transport, for example, contribute money for related university research, as is required in the Australian Capital Territory. Cities should develop business models and partnerships to accelerate successful experiments and scale up ideas and technologies.

Research and innovation for mitigating urban climate change and adapting to it must be supported at a scale that is commensurate with the magnitude of the problem.

Displacement, Migration, and Urbanization in the 21st Century
News