We’re all struggling to stay oriented given the dizzying, dramatic changes that Covid-19 has injected into every facet of our daily life. For many cities and counties, stay-at-home orders have created an alarming shortfall in one of their key revenue sources: sales tax.

But there are other incremental revenue opportunities that cities can explore, and now may be the time to do so. One possibility for cities to seriously consider is monetizing their vast stores and numerous types of data. And this isn’t only for huge cities; municipalities of all sizes possess data that can be monetized.

When talking about monetizing city data, we’re taking a very wide perspective. First, it’s important to note that we’re not limiting this idea to new kinds of data being generated from tech-focused or smart city projects. Instead we’re talking about the extensive legacy data that most cities have been gathering for many, many years, in addition to any newer data streams that are becoming available thanks to new technological innovations. In other words, a city does not have to be a smart-city powerhouse to have monetizable data assets. 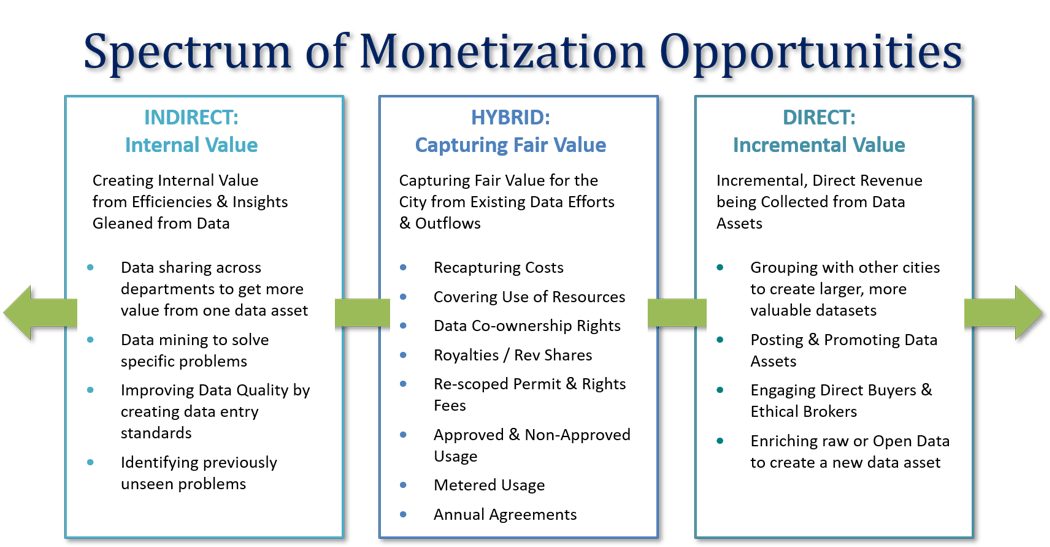 We encourage public sector partners to think about data monetization as a spectrum of opportunities. On one end, there’s indirect monetization, which refers to the obvious idea of getting more value from data by doing more with what already exists. That could mean putting data in a more accessible form or location; sharing it across departments more effectively; or mining it more deeply to identify potential operational insights, anomalies, or efficiencies. Cities are already thinking about these things, and although pulling it off is not as easy as it might sound, there is already a lot of effort in this area in many towns, cities, and counties.

A great example is Public Works or Transportation departments that might be installing traffic cameras or other devices to address one set of problems, while Public Safety would like to get their hands on that data for crime fighting and policing activities. This scenario can be complicated by different divisions starting with smaller, pilot project sized budgets, which make it harder to plan the pilot for more than one department’s needs. But data can always be re-worked to serve multiple purposes, and cities that spend the time approaching data this way see sizable efficiencies for very little additional expense.

On the other end of the spectrum is the idea of direct monetization, meaning new, incremental revenue flowing directly to the city in exchange for the rental, purchase, or limited use of the city’s data. This is approach requires some focus and a proactive sales effort, but can deliver attractive, meaningful revenue streams.

Here, it’s important to consider the many dozens of different data buyer categories that actually exist in the global data market. We’re not talking about something as trivial and uninteresting as a list of names. Instead we’re talking about categories of data related to operational areas like traffic, foot falls, point of interest, storm water flows, water usage, air quality, road conditions, accident conditions, and many more.

For example, tech firms that offer apps and services to home buyers to help them learn about the more nuanced aspects of a neighborhood they are evaluating tend to acquire many kinds of data to feed the models that run their tools. Data that cities may have been tracking for many years, like residential and commercial vacancies, can be a gold mine for these firms, as it is difficult to independently gather these data otherwise.

It is true that there are hurdles to making this direct monetization take place immediately. But there are solutions to these challenges.

One hurdle is related to volume: Data buyers typically prefer to buy sizable quantities of data from a very few sellers, rather than trying to buy small quantities from many sellers. This is entirely solvable: Cities can band together to aggregate attractive data assets and create larger data offerings.

The other is access to searchable inventory. At present, since so few cities are making their data available, it’s very difficult for buyers to locate and peruse the available inventory. We’ve created a data directory that is completely free for public sector partners to use, and they can post listings about their data assets which we then put in front of interested buyers.

We’d like to see cities get so good at thinking about revenue from data that they consider these incremental revenue streams as one of many inputs when they prioritize new projects. The possibility of incremental revenues from data, or the lack thereof,  could influence the timing and nature of new smart city or other innovation projects, giving cities a two-for-one in terms of the value a project could bring.

In the middle of the spectrum is what we think of as the Hybrid opportunity. This is often where cities are most comfortable getting started, since its initial focus is on ensuring that the municipality is getting fair value for the time, effort, and costs of the city’s current efforts supplying data to other entities.

Sometimes referred to as “data outflows,” this can refer to any data that municipal personnel are gathering, handling, processing and/or making available to entities outside the jurisdiction. Importantly, it also includes data that cities should be receiving or getting access to, but are not.

For example, we regularly see situations where tech companies have deployed their technology in a public jurisdiction and are guzzling down enormous quantities of valuable data as a result. The firms then use this data to power their own products, earning themselves sizable revenues. Yet in example after example, we see the city itself, on whose public right of way, or public lands, or buildings where many of these deployments take place; being completely left out of the chain of data ownership, or even access, to the data.

A classic example is the micromobility players operating electric scooters. Typically these players come into a city and, in exchange for a small permit fee of some kind, are then let loose on the city’s public right of way, heavily using that asset which cities spend millions of dollars to maintain and manage. And while cities can make a range of different decisions about what that usage fee should be, one thing we see often is that cities are routinely unable to obtain and use the very valuable trip data that results from those scooters.

Each scooter tracks exactly who is using it along with all the associated demographics of their users, along with where and when the user starts their trip, the routes they take, the stops they make, their journey time, and their final destination. Cities should absolutely insist that they get access to, and a perpetual license for, all of that trip data. Imagine how many insights that data might offer to city planners and managers to operate their city more efficiently, to refine their planning around crosswalks and traffic signal placement and timing, and a dozen other operational areas that the city could provide these data-driven insights to.

These kinds of unfair and inequitable relationships need to be resolved. Public entities invest enormous sums of taxpayer dollars in managing, upgrading, and servicing publicly owned property, streets, and right of way. Technology tools that build products on them or around them should at the very least share that data with cities they’re operating in.

This hybrid category is almost always the first, best place to start. Virtually every city can re-orient its data outflow agreements to give the city a much more equitable part in these data-driven installations, to include revenue and access to valuable data that might help them optimize operations.

What about Open Data?

To some, the idea of monetizing municipal data can seemingly be at odds with their core mission of public service and the public good, and to open data initiatives. But that’s a false dichotomy because these two ideas are not mutually exclusive, and in fact they can coexist very synergistically.

Open data initiatives are highly valuable and worthy initiatives that should continue, and indeed expand as much as possible; the innovation and transparency that they were designed to foster are much needed. In some respects, the notion of monetizing city data can be a way to underwrite the non-trivial costs of managing a fulsome Open Data program.

The data available in most open data portals is a small fraction of the total data that a city or county may possess. So, the least complicated way to approach this idea is to only look at monetizing city data that is not part of their open data initiative.

To go one step further, note that most open data is raw, unprocessed, and non-augmented. Cities can credibly take these raw data assets and refine and/or augment them in myriad ways to produce a new data product that does not compete or conflict with open data assets. By shrewdly understanding the buyers interested in a city’s data, the city can produce a data product that is unquestionably monetizable. Cities can even syndicate their data products to create efficiencies and attractive opportunities.

Cities are grappling with immediate funding gaps that can’t wait. In another space and time, cities may have looked at these approaches as contrary to their mission of serving the public, too complex to take on given their many priorities, and/or unseemly in that focusing on making money isn’t a city’s mandate.

Yet today’s realities seem to require that we rethink the way we do nearly everything, and open our minds and practices to new ideas and possibilities. Yes, rewiring a municipality’s approach to data will take some time and a concerted effort. But this isn’t an all-or-nothing gambit. Cities can take small steps, test and learn, and in so doing, develop a meaningful, new set of skills that allow the city to take more control over its funding and its future.

Source: Meeting of the Minds

Collaboration: Call For Expression of Interest: Hosting of the 12th Session of the World Urban Forum (WUF12) in 2024
Deadline: Monday, November 30, 2020
END_OF_DOCUMENT_TOKEN_TO_BE_REPLACED

Team up for climate action!
Event

Inequalities in Europe: when housing and energy are a luxury
News
END_OF_DOCUMENT_TOKEN_TO_BE_REPLACED

Article:
Inequalities in Europe: when housing and energy are a luxury
Book/Publication:
UN-Habitat 2020 Catalogue of Services
Best practice:
Placemaking Toolkit: Designing People Places - A toolkit for communities and designers to design and implement public spaces and buildings in Palestine
Housing Must be at the Center of COVID-19 Response
END_OF_DOCUMENT_TOKEN_TO_BE_REPLACED